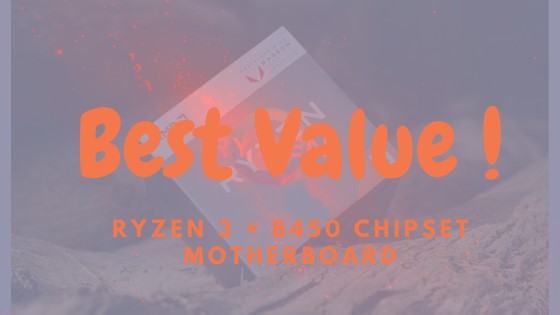 Great news for anyone who waiting for a perfect budget CPU for gaming, the red team has determined to deliver a tight budget line with an amazing price tag for high-performance chips, especially for gaming purposes. The Ryzen 3 3300X and 3100 surprisingly come with much more affordable prices at launch than many reviewers expected. Makes it the new budget champ already that offers superb value for gamers and overclockers.

Most current gaming still quite runs well with 4 cores and 8 threads processor, so if really on a tight budget and urge to play PC game soon, the Ryzen 3 3300X and 3100 seems to be the best choice. Besides, you can spend the rest of your cash to get a good budget motherboard, SSD, and memory RAM, and spend it more on the most important one, the graphic card.

Ryzen 3 3300X & 3100 vs. Other Chips Option On The Value Competition Comparison Table

The 3300X comes with 4 cores with 8 threads on a one full CCX activated (core complex), also features a 3.8GHz base clock plus 4.3GHz boost clock. A single CCX (core complex) means it reduces inter-CCX latency and less latency between the cores gives a significant gaming performance boosts.

With high base clock speed and boost clock, the 3300X is essentially being competent in all-around gaming performance. It can level the Intel’s flagship a few years ago, the i7-7700K, and even can catch up AMD’s higher Ryzen CPU on some gaming performance. To conclude, the 3300X is a solid deal for gaming even better if you can overclock it with the best affordable motherboard.

The Ryzen 3 3100 on the other hand, actually using a very different configuration and lower clocks, 2 active cores in 2 CCX or 2+2 cores design. Ryzen 3 3100 remains 4 cores with 8 threads, but base clock speed down to 3.6GHz including a boost clock of 3.9Ghz. Still, a solid overall budget performer and great for overclocker besides a more affordable means to be in favor of more common PC build.

Both CPU comes with a Wraith Stealth cooler, which is adequate for gaming or a little bit OC. Also, support PCIe 4.0, SMT enabling, 3200MHz of memory speed by default.

As a budget CPU choice, to pair it with B450 chipset mobos would be a wise choice that will offer a tremendous value for the money. Using the B450 chipset motherboard has a high possibility out of the box support Ryzen 3 3300X and 3100 CPU as long it already utilizing Ryzen 3000 series Bios that released a year ago.

But the bad news is if you want to upgrade to Ryzen 4000 series next year and keeping the B450 chipset mobo, as AMD announced that only X570 and upcoming B550 coming motherboard will support Ryzen 4000 series.

Waiting for the B550 motherboard platform probably also a good option but if you don’t have a plan to upgrade to the 4000 series by using the same motherboard then the best budget B450 chipset mobos are the most suitable option for a budget CPU king.

Due to receive a lot of criticism from its community fan base, AMD arranged to continue its support X470 and B550 chipset motherboards compatibility for the next upgrade to Ryzen 4000 series. AMD seems to listen to the fan base and buyers alike besides giving a real solution, though with some warnings due to the technical limitation that could be a hard-working for AMD’s engineers to complete.

This “beta” BIOS upgrade is a one-way path that will disable support for some older Ryzen series (not yet declared which would be removed) in order to give support for the Zen 3 Processor ROM space available moreover you can’t flashing to an older BIOS version anymore. And, there is no confirmation that the “one-way path upgrade” BIOS would be released soon after Ryzen 4000 launched.

Yet, it’s still absolutely great news for everyone that already or has a plan to get B450 or X470 chipset mobos and think to upgrade to the Ryzen 4000 series soon, as it will deliver a simple and relatively cheap path forward to AMD’s next-gen.

MSI B450M Gaming Plus is a decent mobo, it has a slightly weaker VRM compared to the well-known B450 Tomahawk and without sturdy design as the Tomahawk has. But in overall, MSI B450M Gaming Plus is a budget motherboard that still carries about the mid-range quality of power delivery and surely more than enough to handle Ryzen 3 3300X and 3100 overclocking, even, it still can handle any 8 core Ryzen overclocking comfortably.

Considering it’s a tight budget board, it means it drops some latest features but could be not too necessary if you only want just smooth gaming. A mediocre ALC887 audio CODEC, Realtek LAN, only 2x memory RAM support, none latest 10 Gbps USB, limited fan configuration, and without robust heatsinks perhaps a huge dealbreaker for the hardcore gamer.

But again, if you are just want to achieve the best affordable gaming Rig then you won’t regret picking MSI B450M Gaming Plus. Even more, for the BIOS problem, in case if you get the older Bios version simply update it using the BIOS flashback as it can work without CPU or Memory Ram installed.

You cannot go wrong choosing the Gigabyte B450M DS3H for the tight budget option, Gigabyte B450M DS3H is one of the cheapest B450 board right now that enough for 3300X and 3100 moderate overclocking. Also, I’m pretty sure there’s a high chance this board will compatible out of the box with the Ryzen 3 3300X and 3100 as it utilizing the same Bios with earlier Ryzen 3000 series, which most stock should have.

The Gigabyte B450M DS3H has decent power delivery, 4x Memory slots up to 64 GB, and 1x M.2 NVMe, 4 Ram slots without breaking the bank. It should be fit for an affordable processor just like the Ryzen 3 3300X and 3100, a combination of budget motherboard, a fast SSD, and best cheap memory RAM would offer excellent value performance in overall.

But you should acknowledge that this is a very basic motherboard with just necessary features implementation, get this board if you want a mobo that will work well out-the-box only. Some limitations might concern for you, just like only give 2 fan headers and 4 SATA slots that possibly just 2 SATA slots available since a big graphic card will block these 2 slots.

But anyway, this board is excellent for its price and if you don’t really need some fancy features and looks then Gigabyte B450M DS3H works more than fine for your Ryzen 3.

B450I Gaming Plus AC is the budget B450 Mini-ITX right now, typically a powerful tiny board with mid-range VRM design class (4+2 phase), decent looks SFF with the huge heatsink on it, dark and red styled without RGB accents, and out of the box Intel Dual Band Wireless-AC 3168 module that supports up to 433 Mbps speed.

B450I Gaming Plus AC is the pretty solid choice for an affordable small form factor PC builds, most suitable for your HTPC or second Rig. Some features drop for Mini-ITX surely, but might not huge downgrade after all for having 4 SATA slots and only one M2 slot, 2x Memory RAM slots 32GB RAM as maximum, and 1x PCI-E Gen3 X16.

However, be aware it’s a tiny board with huge heatsink, you have to get a small aftermarket CPU cooler too or liquid cooling. AFAIK most chance Ryzen stock cooler doesn’t match and hits a heatsink.

But you can do a little trick here by removing the outer plastic ring of the fan has (just remove the two tiny screws behind AMD branding), detach plastic ring off provided enough room. The outer shroud does nothing change the cooling performance.

Here’s video from Hardware Unboxed that might help you

If you demand a better B450 VRM implementation but still on the budget go check https://goodgamingmotherboard.com/best-budget-b450-motherboard-for-overclocking-ryzen-7/