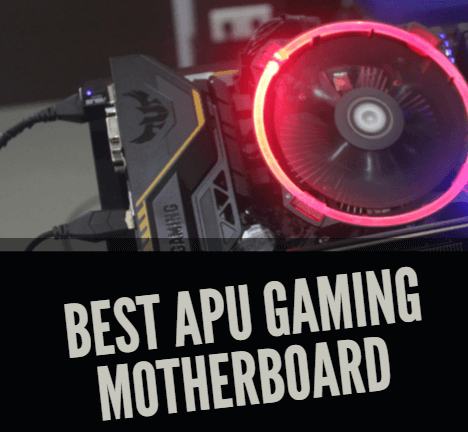 Here some recommendation for the best motherboard that fully compatible with latest APU processor, the 3400G and 3200G also the previous Raven Ridge 2400G and 2200G has an excellent combination for a good performance for average productivity but still has the power to run AAA games without any additional graphics card. The latest APU offers the best bang for the buck for 720p and 900p gaming or even 1080p at low setting.

APUs processor is the right choice if you want to build a high-performance secondary PC rig, HTPC or build a PC for your mom and it’s a better choice than buying used discrete GPU because of the mining boom 2018. Moreover, this APU also overclockable.

AMD Ryzen 3 2200G with Radeon Vega 8 Graphics surely the best value APU to play AAA games at low video settings and also for high productivity for content creation by 4 cores and 4 threads. This value AMD APU technology already grant you a high-speed performance to work or play. You can also bump up the 2200G speed to get higher performance than 2400G stock quickly.

The 2400G with Radeon Vega 11 has 4 cores and 8 threads a slightly better performance toward productivity or content creation, 2400G is the most potent APU in 2019. Vega 11 around 10% better performer than Vega 8 or maybe less because of memory RAM constraint.

Athlon 200GE is the budget-oriented based on a modern AMD’s Zen architecture; even this APU has good performance iGPU at 720p gaming, the Athlon can achieve up to 60FPS on some competitive games at the low setting just like Counter-Strike: Global Offensive and Overwatch. Also, this APU is straightforward to overclock as you pair it with a decent motherboard and dual channel memory RAM.

Better RAM will positively help, APU overclocking may increase overall performance by up to 30% even more but it won’t worth it anymore because you need the most excellent VRM/SOC motherboard also high-grade memory RAM on the market to do some extreme APU overclocking unless you are having fun with OC. My recommendation for the budget minded, do moderate OC using adequate SOC motherboard implementation and memory kit and also the 2200G gain the best value because it easily to overclock to get beyond 2400G stock performance.

Ryzen 3 3200G also offering very identical with 2200G just a little bit tweak on the clock speed. I think it not worth it if you already have 2000 APU series on your Rig, only with a little tweak can meet the 3000 series performance. But if you want to build a new Rig then I suggest you to always check the price first.

If you are gonna get the existing chipset motherboard (B350, B450, X370, and X470) for the 3rd Gen Ryzen, It’s crucial to buy a motherboard with the latest Bios from the retailer, I personally favor to get motherboard with flashback Bios if possible and wait for stable Bios.

The perfect mobo for Ryzen APU

Well, it depends on what are willing to do with those APUs rig, although for overall reliable performance, the motherboard should provide a unique power delivery and also good SOC for dedicated power for APU.

The others aspect might be essential, just like video outputs motherboard because some good AM4 motherboard doesn’t even provide video output, and some may not offer the latest DisplayPort and HDMI, including supports for FreeSync technology.

With this article, I hope to help you to narrow your choice and give some thought about the APU motherboard because there are a lot of compatible boards for APU out there.

720p gaming may not be enough for nowadays enthusiast gamers, APU does not tend to satisfied hardcore gamers for sure, it still has limited power compared to a traditional mixture CPU + external GPU. Even for upgradeability, 2400G is hard to catch up the fastest processor out there so it will bottleneck a lot if you install the latest high-end graphics card. And surely not a multi-GPU choice because of PCIe x8.

Shared memory means that the performances also depend on memory RAM speed, it will be a dilemma for a budget-oriented user, if you shall pick the expensive memory RAM kit to elevate the value APU performance.

Also, AMD confirmed that they would release Radeon Software Adrenalin Edition driver releases for every three months, that means you have to patience if you find some bug in your current game because of driver problem.

But overall if you can take such limitations, then APU is the best choice for you.

So here is my recommendation for best compatible APU motherboard

It looks like the perfect option for overclocking APU is it should have a potent VRM, SOC VRM, memory overclocking plus extra video output connectivity but it may be too steep for a budget minded and it’s not worth for the money anymore.

It’s an extremely tough M-ATX form factor board, look such a solid board, feature rich and great VRM/SOC so apparently it required for APU graphic overclocking, much better than ASUS TUF plus gaming. This motherboard is also good at overclocking memory RAM.

Premium onboard audio codec, using Realtek ALC1220A plus exclusive DTS Custom onboard audio, overall it offers excellent gaming experience and others entertainment as long as you are not an audiophile, this onboard audio is more than enough.

ASUS TUF B450M-Pro Gaming could be the best motherboard for Ryzen 3400G overclocking.

It is a reliable motherboard offering one of the best VRM/SOC implementations. Theoretically, it is shown as the first board for APU although Biostar looks like having a problem with their Bios for optimizing performance especially for memory overclocking.

This board packed with tons of modern features that may be useful for you, just like Dual Bios, Bios Switch, Debug Led, and dashboard button. Biostar X470GT8 also offer excellent design board and visually pleasing by a neutral color, and customizable RGB LEDs with VIVID LED DJ software even some additional LEDs through the 5050 LED headers.

Despite having a problem with memory overclocking this motherboard still offers great value for money, a bunch of useful features, high-end X470 chipset and great VRM/SOC implementation.

ASUS ROG Strix X470-F Gaming just like previous successful ROG series, this board fit for any high-end AMD Ryzen CPUs. It should be one of the best Ryzen APU motherboards out-there, proper VRM and SOC implementation, cooling effectiveness, high-grade components across the motherboard and offering exceptional audio quality.

In other sections, ASUS ROG Strix X470-F Gaming mounted with an excellent audio chipset ALC 1220A among high-quality audio components while Intel I211-AT Gigabit works for the internet cable solution.

Overall this board would be the perfect motherboard for APU overclocking, but it’s a pricey motherboard. If you are budget minded then this board not for you and just as I said before, overclocking APU (CPU and IGPU) to reach its real potential may not worth it anymore because you need others part that could be expensive.

The B450M Pro4 could be a compelling choice for budget gamers or HTPC. It’s a good design board, adequate storage and connectivity option, some RGB LEDs, good overclocking performance, and some new techs at an affordable price tag.

You won’t get high-grade sound quality from this board because ASRock still implemented the old Realtek ALC892 Audio Codec, but adding discrete soundcard could be the right solution if you are an audiophile.

ASRock made B450M Pro4 well as an essential HTPC requirement, for a storage solution, there are 4 SATA ports, an Ultra M.2 32Gb/s plus one M.2 6Gb/s using SATA port. For the connectivity, there are two USB 3.1 Gen2 Type C + Type A at the back panel, including 6 USB 3.1 Gen1 which is sufficient for nowadays demands. Also for Ethernet solution, ASRock using standard Gigabit LAN and no wireless option on this mobo.

The newborn board ASUS TUF B450M-Pro Gaming have the whole package for APU overclocking because of high-grade VRM/SOC implementation and good at memory overclocking, it also has excellent audio, 2 M.2, Bios, and robust board. But missing USB 3.1 Gen2 Type, no triple monitor support, and there is no DisplayPort may give you some reason not to pick this board.

Biostar X470GT8 also has a great value board despite lack of memory overclocking capabilities because of Bios problem, but the real problem is hard to find this product right now. ASUS ROG Strix X470-F Gaming has everything to speed up APU performance and filled up with tons of features but it’s an ATX board might not fit for HTPC and it’s an expensive board for APU.

ASRock B450M Pro4 might be the best budget choice, despite limited memory tweak, no DisplayPort, and old Realtek audio codec but a solid board for medium APU O.C, and USB 3.1 Gen2 Type C at the back panel. Gigabyte B450I Aorus Pro WiFi is aesthetic Mini-ITX board, competent sound implementation, out of the box Wi-Fi, triple monitor support, and 2 M.2, only limited to memory tweak capability.